skip to main | skip to sidebar

A new wave of house buyers are prepared to commute for over an hour to secure properties at the right price, according to a national survey carried out by Real Estate Alliance.

The Q1 REA Average House Price Survey has revealed price rises in outer commuter ring locations such as Laois and Offaly are being driven by Dublin-based first-time buyers being forced further out from the capital by the Central Bank’s deposit rules.

REA also report seeing a decrease in the amount of first-time buyers between the ages of 25-40 attending viewings in the Dublin housing market in the first quarter of 2016.

The REA Average House Price Survey concentrates on the sale price of Ireland's typical stock home, the three-bed semi, giving an up-to-date picture of the property market in towns and cities countrywide.

This activity is driven in part by new building activity in the north of the county and pockets of south Dublin which have seen the return of the cash buyer to the market.

The Central Bank’s deposit rules and the lack of suitable supply are continuing to stagnate the market for mortgage buyers in the capital and commuter areas.

While prices have risen slightly by €2,706 (+1.31%) to €209,559 in the commuter counties and main cities such as Cork and Galway, these rises are confined to the few towns that have new developments on the market.

However, REA agents around the country state that many local rises are now being caused by lack of stock driving up prices.

“We are seeing a marked absence of the 25-40 year olds at viewings in the capital over the past few months as, under the current Central Bank restrictions, they are finding it impossible to raise the deposits needed to purchase houses over the €220,000 limit,” said REA chairman Michael O’Connor.

“Louth is the perfect example of this trend in commuter migration. Drogheda prices remained static at €197,500 in Q1 while commuter interest caused prices to rise by €10,000 to €135,000 in Dundalk, which is 35km further away from Dublin but over €60,000 cheaper on average.

“Although supply is extremely limited, suitable properties are now being bought in these areas by buyers who are prepared to travel over an hour to work in the capital.

“Lack of supply of suitable housing is the paramount issue nationwide, and while we have had rises in many areas, they are primarily driven by buyer competition for low supply.”

With prices rising by 5.1%, and viewings up substantially, Limerick was Ireland’s fastest growing city in Q1, with three bed semis increasing by €8,000 to their current level of €165,000.

Growth continued in Cork city (+1.75%) and Waterford (+1.61%), while the market in Galway remained static in Q1, with no new developments expected in the Connacht capital until 2017.

Posted by Real Estate Alliance at 17:23

The first Irish property exhibition held in New York City has been hailed as a huge success by organisers Real Estate Alliance, who met with 425 potential buyers last weekend.

REA members were delighted with the business done at the exhibition in Manhattan's Fitzpatrick Hotel, with 90 customers planning to set up arrangements with REA agents to talk further over the next two months and 25 inspections trips already planned for specific properties.

32% of the attendees were Irish families looking to return home, 19% were retirees looking to downsize, and 17% were young Irish people returning to work.

5% of attendees were searching for a holiday home and another 3% were keen to buy a second home with ties to family in Ireland.

A survey of attendees also found that 16% were investors while 8% were US-based people who have homes in Ireland and were looking for them to be either sold or managed.

70% of those questioned at the ground-breaking exhibition aim to buy property in Ireland within the next two years.

“Our agents were really pleased to meet with so many potential buyers and they expect those conversations to very quickly convert into sales,” said REA chairman Michael O’Connor.

“Those present showed interest in a vast spectrum of price ranges as the attendees came from a number of buyer groups.

“Many of those US buyers have already made plans to travel to Ireland to view their potential properties, with a number of Irish-
American buyers due to visit for the centenary celebrations over Easter and the summer break.”

Almost one in six overseas enquiries about Irish property are now coming from the United States, according to a nationwide REA survey.

The established survey of REA members shows that enquiries from the US increased from almost zero to 16% in 2015. And this is signaling the first major return of emigrants who feel that the time is right to move back to Ireland.

“Many young Irish families looking to move home mentioned the cost of education and healthcare in the US as a major factor for returning to Ireland,” said Michael O’Connor.

“As children grow towards college age, parents may be facing costs of approximately $60,000 per year, with even secondary education costing a minimum of $15,000 per annum.

“The investment sector proved stronger than we would have anticipated, with 16% of those attending seeking to purchase a buy-to-let property in Ireland while 8% were US Citizens with properties in Ireland who may have inherited them and require agents to manage the properties or sell them.

“The majority of attendees were interested in buying a house with just 20% aiming to purchase an apartment.

“In the main, our young Irish people looking to return for work are seeking out properties in cities, while couples with children are looking for properties on a nationwide basis, close to their family.”

The exhibition was also attended by 20 US-based realtors with the aim of introducing buyers to Irish agents, while there was also significant media interest in the US.

Real Estate Alliance (REA) is Ireland’s leading property group of Chartered Surveyors with over 55 branches nationwide, comprising many of the country’s longest-established auctioneers and estate agents.

Posted by Real Estate Alliance at 15:59 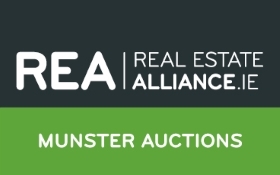 Continuing the positive trend for purchasing properties at auction, 137 people registered for the first REA Munster Auction of 2016 which was held at the Limerick Strand Hotel on Tuesday last, 1st March. Only one Lot remained unsold when the auction ended however this property is now under negotiation and is expected to sell in the coming days. Sales prices on the day exceeded AMV’s by an average of 17% with particular interest in 4 terraced houses in Waterford which were sold as one Lot and achieved €88,000 over the AMV. There were multiple bidders on each of the properties indicating strong demand in the Munster region.


The next REA Munster Auction is taking place on Thursday,  21st April in the Limerick Strand Hotel. Details will be posted online in the coming days.
Posted by Ryan from MyHome.ie at 09:15